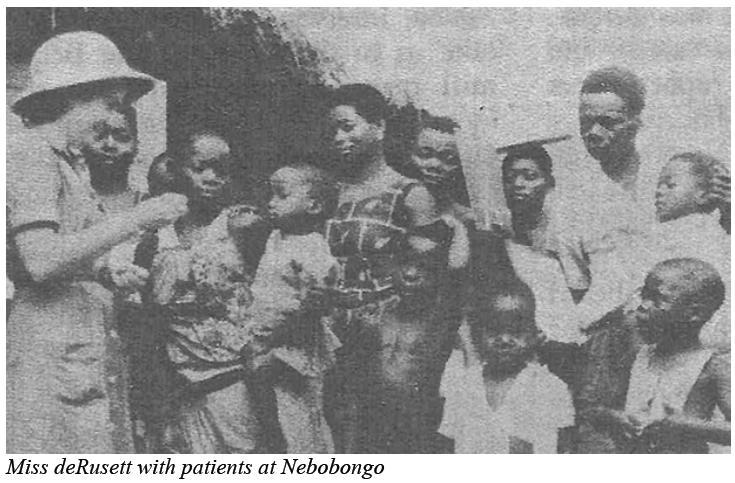 Elaine deRussel attends the Katoomba Baptist Church in New South Wales. She is in her eighties, used to be a missionary in Africa. She gives out John’s Gospel from TPTL in the Blue Mountain train. Recently she gave a Muslim man a tract, “Who on Earth is Jesus” and a copy of John’s Gospel. “Promise me you will read it,” she said. “Yes,” he replied.

I am sharing with you an abridged version of her story, “The Restraining Hand”.

In mid August we were busy in the daily round of our medical work when suddenly I was called to the dispensary to find an African with a
gun wound. I knew about leprosy, malaria, trachoma, conjunctivitis, and childbirth but not about a gunshot wound. My colleague and I asked for
God’s wisdom and strength. The Lord helped us! When he was healed and discharged, my life changed.

Two days after admitting the gunshot case we watched trucks go past with fierce looking armed Simbas. We knew a war was on.

From then on we heard of atrocities committed on anyone in a position of authority. We never knew when they would come to our compound demanding penicillin or ordering us to hand over the keys to our truck.

We heard reports of other missions razed. We came to dread the nights but always the Lord gave me the promise from His word to rest upon
Him.

Then it was our turn. At 2.30am one of the male nurses pounded on the door. “Madam,” he cried, ‘the Simbas have taken off Madam Doctor and they are gathering up all the whites.” I felt fear coming into my heart but God replaced it with His peace. Samuel, an African worker, weeping, said, “I will stay and die with you!”

At first nobody seemed to know what to do with us. Some of our captors were cruel; a few were apologetic. Later the manager of the cotton mill, Bill, was murdered. He was a kindly and godly man from Arizona, USA. The Africans pleaded that he be spared along with Jim, a British missionary school teacher. They were both beaten and killed.

We heard a radio report of a massacre, so we fled into the jungle. After a few hours of freedom, we were discovered in the early morning by ten boys from the youth movement. They were armed with spears and a metal club. They danced around us screaming and prodding us with their spears.

They marched us out of the jungle and forced us to walk on barefoot on sharp gravel. They beat me because they said I was sneering at them. In the goodness of the Lord, a mission-educated Congolese, now a Simba, intervened and told them to take us to a house. We spent the night on the concrete floor. We sought the Lord in prayer.

On December 30, things suddenly looked very bad to us. We heard the sound of exploding bombs, the rattle of machine guns. We knew the mercenaries were close. “O God,” I said, “if you don’t get us out today we will never get out.” The Simbas beat us with the butts of the guns. After what seemed an age some unshaven white men with machine guns called out, “Where are the missionaries?” Quickly we were helped into trucks and escaped with an armed convoy.

Within a week I was back in Sydney rejoicing with friends and thanking God for His great love and restraining hand.

Elaine deRusett has not given up!